Longlisted for the Man Booker Prize for 2018.

'Our book of the year - and maybe of Ondaatje's career' Daily Telegraph Books of the Year **LONGLISTED FOR THE MAN BOOKER PRIZE 2018** In a narrative as mysterious as memory itself - at once both shadowed and luminous - Warlight is a vivid, thrilling novel of violence and love, intrigue and desire. It is 1945, and London is still reeling from the Blitz and years of war. 14-year-old Nathaniel and his sister, Rachel, are apparently abandoned by their parents, left in the care of an enigmatic figure named The Moth. They suspect he might be a criminal, and grow both more convinced and less concerned as they get to know his eccentric crew of friends: men and women with a shared history, all of whom seem determined now to protect, and educate (in rather unusual ways) Rachel and Nathaniel. But are they really what and who they claim to be? A dozen years later, Nathaniel begins to uncover all he didn't know or understand in that time, and it is this journey - through reality, recollection, and imagination - that is told in this magnificent novel. 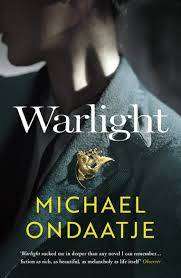 17% off
Love and Other Thought Experiments
Sophie Ward
€8.99

To the Land of Long Lost Friends
Alexander McCall Smith
€10.85

17% off
Love and Other Thought Experiments
Sophie Ward
€8.99

In Our Mad and Furious City
Guy Gunaratne
€11.25

Everything Under
Daisy Johnson
€10.99

Lincoln in the Bardo
George Saunders
€11.25