Among the earliest realistic depictions of trench warfare, this novel is based on author Henri Barbusse's World War I combat experiences. The journal-like anecdotes portray daily life amid a squad of French volunteers after their country's invasion by Germany. The soldiers are workers, farmers, and tradesmen from different regions of France. They emerge as individuals, with families, good traits and bad, hopes, and fears. Their tedious days in fetid trenches are punctuated by terrifying battles and the threats of poison gas, artillery bombardment, sniper attacks, and machine-gun fire.

Under Fire received French literature's prestigious Prix Goncourt for fiction in 1916 and drew both acclaim and criticism for its harsh realism. A century later, it remains a compelling and psychologically revealing work that exposes the horror, the loss, and the incomprehensible nature of war, even to its participants. Barbusse's wartime ordeals led to his lifelong pacifism, and his novel ranks among the first and most insightful indictments of imperialist warfare. 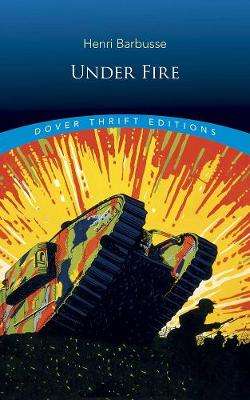 Paperback
Under Fire also appears in these Categories:

Tess of the d'Urbervilles
Thomas Hardy
€12.50

Bernice Bobs Her Hair and Other Stories
F. Scott Fitzgerald
€4.95

2.5% off
The Crocodile and Other Stories (riverrun Editions)
Fyodor Dostoevsky
€12.05

2.5% off
The Daily Sherlock Holmes: A Year of Quotes from the Case-Book of the World's Gr
Arthur Conan Doyle
€12.05

The Way Back
Erich Maria Remarque
€12.35