Twilight of the Idols

"Twilight of the Idols means that the old truth is on its last legs," declared Friedrich Nietzsche in this 1889 polemic. Forceful in his language and profound in his message, the philosopher delivered the nineteenth century's most devastating attack on Christianity. Intended by Nietzsche as a general introduction to his philosophy, it assails the "idols" of Western philosophy and culture, including the concepts of Socratic rationality and Christian morality.

Written while Nietzsche was at the peak of his powers, less than a year before the onset of the insanity that gripped him until his death in 1900, this work's proximity to the end of the author's career renders it a distinctive portrait from his later period. The source of the famous dictum, "Whatever does not kill me makes me stronger," it blazes with provocative, inflammatory rhetoric that challenges readers to reexamine what they worship and why. 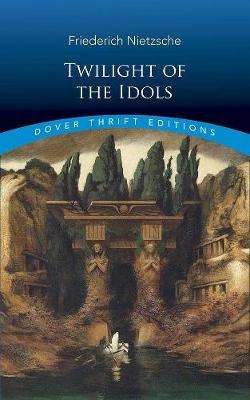 Paperback
Twilight of the Idols also appears in these Categories:

The Government of No One: The Theory and Practice of Anarchism
Ruth Kinna
€12.05

The Courage to be Happy: True Contentment Is Within Your Power
Ichiro Kishimi
€11.25

Thank You for Arguing: The Art of Persuasion
Jay Heinrichs
€13.75

Morality: Why we need it and how to find it
Jonathan Sacks
€24.99

The Precipice: Existential Risk and the Future of Humanity
Toby Ord
€18.75

How the World Thinks: A Global History of Philosophy
Julian Baggini
€12.50

How to Teach Philosophy to Your Dog
Anthony McGowan
€15.65

Sex and the Failed Absolute
Zizek, Slavoj (University of Ljubljana,
€27.70