It was the story that shocked the world: Russian athletics was revealed to be corrupt from top to bottom, with institutionalised doping used to help the nation's athletes win medals they did not truly deserve. But the full story of the couple who blew the whistle has never been told - until now.

Vitaly Stepanov worked for the Russian anti-doping squad, committed to his job; Yuliya Rusanova was one of the country's most promising 800m athletes. When they met, he fell in love with her; she revealed she was taking performance-enhancing drugs. It could have been the end of their relationship, but instead they decided they would reveal the scale and the scope of the corruption in Russian athletics - the bribes, the drugs, the abuse. At enormous personal risk to their marriage and even their lives, they recorded and filmed athletes and officials involved in the scandal, and then escaped to Germany to pass on their devastating evidence.

Now, with award-winning journalist David Walsh, the man who broke the Lance Armstrong story, they reveal the full truth of what went on in Russia, and the corrupt system that surrounded everything they did. But The Russian Affair is so much more than an unrivalled account of the biggest sporting scandal, it is a warm and human story of a couple fighting to tell the truth and to save their family at the same time, while facing seemingly insurmountable odds. 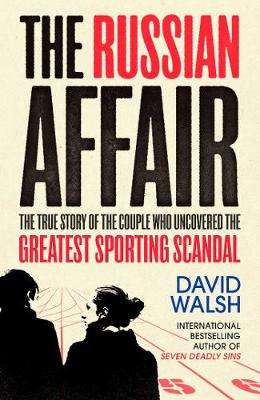 4% off
The Russian Affair also appears in these Categories:

Formula One Circuits From Above: 28 Legendary Tracks in High-Definition Satellit
Bruce Jones
€30.10

Cyclist - Ride: The greatest cycling routes in the world
Cyclist
€36.15

Spirit of Cricket: Reflections on Play and Life
Mike Brearley

The Best: How Elite Athletes Are Made
Mark Williams
€18.05

The Age of Football
David GoldBlatt
€15.65

17% off
A Guarded Life: My story of the dark side of An Garda Siochana
Majella Moynihan