ADAPTED BACKWARDS VIA THE FUTURE FROM THE RADIO 4 SERIES BEFORE IT WAS MADE A richer, deeper, more comprehensive exploration of the Quanderhorn phenomenon. With added secrets. England, 1952. A time of peace, regeneration and hope. A Golden Age. Unfortunately, it's been 1952 for the past 65 years. Meet Professor Quanderhorn: a brilliant, maverick scientific genius with absolutely no moral compass. Assisted by a rag-tag crew - his part-insect "son" (reputedly 'a major breakthrough in Artificial Stupidity'), a recovering amnesiac, a brilliant scientist with a half-clockwork brain, and a captured Martian hostage - he'll save the world. Even if he has to destroy it in the process. With his Dangerous Giant Space Laser, Utterly Untested Matter Transfuser Booth and Fleets of Monkey-driven Lorries, he's not afraid to push the boundaries of science to their very limit. And far, far beyond ... 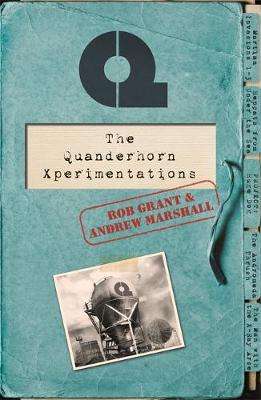 Paperback
The Quanderhorn Xperimentations also appears in these Categories:

10% off
Stories of Your Life and Others
Ted Chiang

The Girl and the Stars (Book of the Ice, Book 1)
Mark Lawrence

The Ranger of Marzanna
Jon Skovron