The Power of Rude: A woman's guide to asserting herself

"Of all the things in the world to worry about, why would anyone put the right for women to be rude at the top of the list? It's a fair question. Happily, there is a very simple answer: I believe that an inability to be rude is one of the biggest issues which still inhibits the equality of women today." The Power of Rude will discuss the way women are constantly worrying about being polite, even finding themselves in uncomfortable situations they'd rather avoid due to a fear of saying the wrong thing. For example, we'll learn about the woman who paid for an entire hen do that she wasn't even invited on (because she didn't want to be rude!), the woman who let her cousin practice kissing on her (because she didn't want to be rude!) and the vegan woman who ate an entire pork chop (because she didn't want to be rude!). This empowering call-to-arms will journey through dating, family relationships, sex, the workplace, money, customer service, and more and show women how we can reclaim the word 'rude' and use it to advantage. For decades, women have been called 'bossy', 'hysterical' and 'neurotic' in situations where men might simply be dubbed 'assertive'. We need to change the narrative around women and we need to use our voices to take control. Rebecca Reid isn't afraid to show us how. 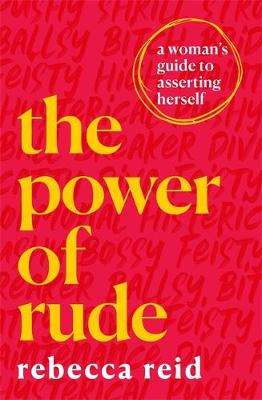 Trade Paperback
The Power of Rude: A woman's guide to asserting herself also appears in these Categories:

This Book Will Make You Kinder: An Empathy Handbook
Henry James Garrett
€15.65

Why Be Happy?: The Japanese Way of Acceptance
Scott Haas
€15.65

Wise as F*ck: Simple Truths to Guide You Through the Sh*tstorms in Life
Gary John Bishop
€18.05

Stillness is the Key
Ryan Holiday
€12.05

Expand the Power of Your Subconscious Mind
Joseph Murphy
€15.65

Failosophy: A Handbook For When Things Go Wrong
Elizabeth Day
€12.05

Behind the Horoscope
Wendell C. Perry
€19.25

Art of Stillness in a Noisy World
Magnus Fridh
€12.05