The Crocodile and Other Stories (riverrun Editions)

'I have always been ridiculous, and I have known it, perhaps from the hour I was born' A man goes mad because he is happy. A civil servant behaves like a monster at a wedding-party. A man is swallowed by a crocodile, but not eaten nor seriously damaged. Dostoevsky's stories inhabit similarly volcanic atmospheres as his novels, places of curiosity and exception. They resemble jokes and anecdotes, told by volatile, voluble, morbidly sensitive and frustrated characters. These narrators all have a tendency to express themselves in crescendos of conflicting emotions, while the stories themselves steer clear of grand conclusions. Michael Wood's selection of Dostoevsky's shorter works is drawn from the timeless translations of Constance Garnett whose work, he says in his preface, gives readers the best of several worlds. 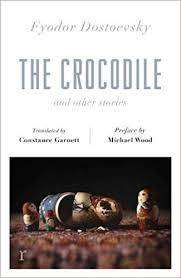 Paperback
The Crocodile and Other Stories (riverrun Editions) also appears in these Categories: