SOMETHING IN THE WATER

Olympic rowers Gary and Paul O'Donovan are the face of Skibbereen Rowing Club, but they're just one piece of the jigsaw. They have become the face of Irish rowing and they have enormously increased the popularity of rowing in Ireland. They wouldn't be Olympic silver medallists, former European champions, and a current world champion in Paul's case, without the club and the people behind the scenes.
Almost 100 Skibberean Rowing Club athletes have represented Ireland at various regattas over the years; a staggering figure when viewed in light of the size of the club. Founded in 1970, it is now the undisputed most successful rowing club in the country and has produced five Olympic rowers since 2000 and a world champion. It's the characters that come together to make Skibberean Rowing Club what it is, both the club's members and the athletes themselves.
Something in the Water uncovers what goes on behind the scenes to create an environment that allows locals to excel on the national and international stages. This story is told through the people and families involved, showing how relatable they are to people and coaches in sports clubs around the country, from GAA to soccer and rugby and beyond. 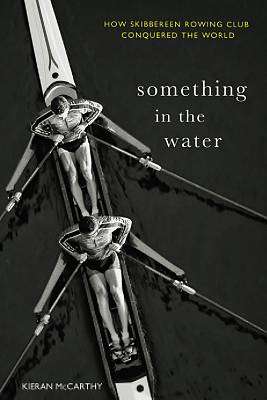 Paperback
SOMETHING IN THE WATER also appears in these Categories:

Lights Out, Full Throttle: The Good the Bad and the Bernie of Formula One
Damon Hill
€18.05

6% off
Me, Family and the Making of a Footballer
Jamie Redknapp
€16.99

17% off
When the World Stops Watching: Is There Life After Sport?
Damian Lawlor
€16.99

Cassius X: A Legend in the Making
Stuart Cosgrove
€21.65

Above the Clouds
Kilian Jornet
€18.05

A HISTORY OF IRELAND IN 100 WORDS
Sharon Arbuthnot