WHAT THEY SAID about RULES OF CIVILITY: 'Everything about this novel, set in 1930s New York, is achingly stylish - from the author's name to the slinky jacket design. Katey Kontent, daughter of Russian immigrants, and Evie Ross, from the sleepy midwest, are an ambitious, wisecracking pair who, despite lack of money and connections, aim to set the city alight. A fortuitous meeting with the apparently wealthy Tinker Grey on New Year's Eve, 1937, will change the course of both their lives.' - Guardian 'If you want shopping at Bendel's, gin martinis at a debutante's mansion and jazz bands playing until 3am, RULES OF CIVILITY has it all and more ...While you're lost in the whirl of silk stockings, furs and hip flasks, all you care about is what Katey Kontent does next. Another one bartender, please.' - Observer 'Irresistible ...A cross between Dorothy Parker and Holly Golightly, Katey Kontent is a priceless narrator in her own right - the brains of a bluestocking with the legs of a flapper and the mores of Carrie Bradshaw.' - Telegraph 'Towles creates a narrative that sparkles with sentences so beautiful you'll stop and re-read them. A delicious and memorable novel that will leave you wistful ...and desperate for a martini.' - Stylist 'My book of the year. If the unthinkable happened and I could never read another new work of fiction in 2011, I'd simply re-read this sparkling, stylish book, with yet another round of martinis as dry as the author's wit.' - Herald 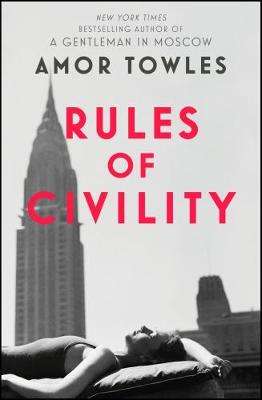 Paperback
Rules of Civility also appears in these Categories: