'Reporter is just wonderful. Truly a great life, and what shines out of the book, amid the low cunning and tireless legwork, is Hersh's warmth and humanity. Essential reading for every journalist and aspiring journalist the world over' John le Carre In the early 1950s, teenage Seymour Hersh was finishing high school and university - while running the family's struggling dry cleaning store in a Southside Chicago ghetto. Today, he is one of America's premier investigative journalists, whose fearless reporting has earned him fame, front-page bylines in virtually every newspaper in the world, a staggering collection of awards, and no small amount of controversy. Reporter is the story of how he did it. It is a story of slog, ingenuity and defiance, following Hersh from his first job as a crime reporter for the Chicago City News Bureau, through his Pulitzer Prize-winning freelance investigative exposes, to the heights of his reporting for The New York Times and the New Yorker. It is a tale of night-time encounters with great Civil Rights leaders, unauthorised meetings with Pentagon officials, raucous dinners with Canadian soldiers in Hanoi, tense phone calls with Secretaries of State, desperate to save face; of exposing myriad military and political wrongdoing, from My Lai to Watergate to Abu Ghraib, and the cynical cover-ups that followed in Washington and New York. Here too are unforgettable encounters with some of the most formidable figures from recent decades, from Saul Bellow to Martin Luther King Jr., from Henry Kissinger to Bashar al-Assad. Ultimately, in unfurling Seymour Hersh's life and career, Reporter tells a story of twentieth-century America, in all its excitement and darkness. 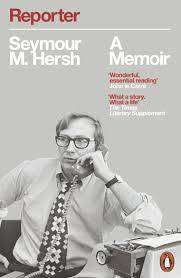 Paperback
Reporter: A Memoir also appears in these Categories:

The Shapeless Unease: A Year of Not Sleeping
Samantha Harvey
€16.05

Eliza Hamilton: The Extraordinary Life and Times of the Wife of Alexander Hamilt
Tilar J. Mazzeo
€13.55