Cats! Some are sane, some are mad and some are good and some are bad. Meet magical Mr Mistoffelees, sleepy Old Deuteronomy and curious Rum Tum Tugger. But you'll be lucky to meet Macavity because Macavity's not there!

In 1925, T.S. Eliot became co-director of Faber and Faber, who remain his publishers to this day. Throughout the 1930s he composed the now famous poems about Macavity, Old Deuteronomy, Mr Mistoffelees and many other cats, under the name of 'Old Possum'. In 1981, Eliot's poems were set to music by Andrew Lloyd Webber as "Cats" which went on to become the longest-running Broadway musical in history. 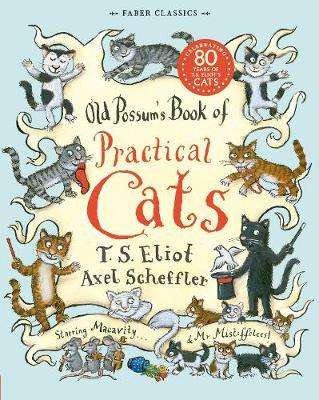 The Book of Not Entirely Useful Advice
A.F. Harrold
€18.05

The B on Your Thumb: 60 Poems to Boost Reading and Spelling
Colette Hiller
€12.05

The Girl Who Became a Tree: A Story Told in Poems
Joseph Coelho
€15.65

There's a Crocodile in the House
Paul Cookson
€8.40

She is Fierce: Brave, Bold and Beautiful Poems by Women
Ana Sampson
€9.65

Poems from a Green and Blue Planet
Sabrina Mahfouz
€17.85

Poems to Fall in Love With
Chris Riddell
€15.45

Poems to Live Your Life By
Chris Riddell
€15.65