In these rich pages, veteran science journalist Leonard David explores the moon in all its facets, from ancient myth to future "Moon Village" plans. Illustrating his text with maps, graphics, and photographs, David offers inside information about how the United States, allies and competitors, as well as key private corporations like Moon Express and Jeff Bezos's Blue Origin, plan to reach, inhabit, and even harvest the moon in the decades to come. Spurred on by the Google Lunar XPRIZE - $20 million for the first to get to the moon and send images home - the 21st-century space race back to the moon has become more urgent, and more timely, than ever. Accounts of these new strategies are set against past efforts, including stories never before told about the Apollo missions and Cold War plans for military surveillance and missile launches from the moon. Timely and fascinating, this book sheds new light on our constant lunar companion, offering reasons to gaze up and see it in a different way than ever before. 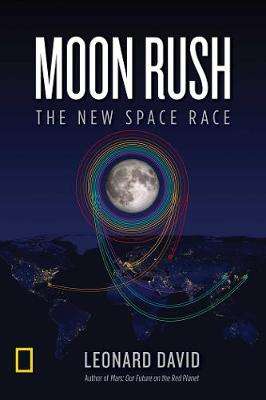 Chasing the Moon: How America Beat Russia in the Space Race
Robert Stone
€12.50

The Secret Lives of Planets: A User's Guide to the Solar System
Paul Murdin
€13.75

The Moon: A History for the Future
Oliver Morton
€12.50

How the World Works: The Universe
Arcturus
€12.50

Moonpower: How to Work with the Phases of the Moon and Plan Your Timing for Ever
Jane Struthers
€17.85

A SMALL ILLUSTRATED GUIDE TO THE UNIVERSE
Ella Frances Sanders
€15.45

Eight Years to the Moon: The Apollo 11 Mission
Nancy Atkinson
€33.30