Macbeth: A Dagger of the Mind

From the greatest Shakespeare scholar of our time, comes a portrait of Macbeth, one of William Shakespeare's most complex and compelling anti-heroes-the final volume in a series of five short books about the great playwright's most significant personalities: Falstaff, Cleopatra, Lear, Iago, Macbeth. From the ambitious and mad titular character to his devilish wife Lady Macbeth to the moral and noble Banquo to the mysterious Three Witches, Macbeth is one of William Shakespeare's more brilliantly populated plays and remains among the most widely read, performed in innovative productions set in a vast array of times and locations, from Nazi Germany to Revolutionary Cuba. Macbeth is a distinguished warrior hero, who over the course of the play, transforms into a brutal, murderous villain and pays an extraordinary price for committing an evil act. A man consumed with ambition and self-doubt, Macbeth is one of Shakespeare's most vital meditations on the dangerous corners of the human imagination. Award-winning writer and beloved professor Harold Bloom investigates Macbeth's interiority and unthinkable actions with razor-sharp insight, agility, and compassion. He also explores his own personal relationship to the character: Just as we encounter one Anna Karenina or Jay Gatsby when we are seventeen and another when we are forty, Bloom writes about his shifting understanding-over the course of his own lifetime-of this endlessly compelling figure, so that the book also becomes an extraordinarily moving argument for literature as a path to and a measure of our humanity. Bloom is mesmerizing in the classroom, wrestling with the often tragic choices Shakespeare's characters make. He delivers that kind of exhilarating intimacy and clarity in Macbeth, the final book in an essential series. 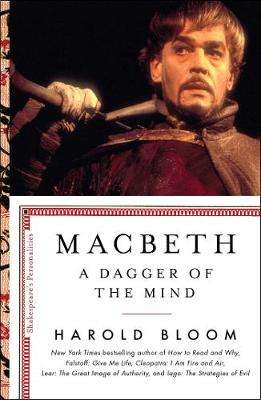 Hardback
Macbeth: A Dagger of the Mind also appears in these Categories:

2.5% off
Irish Drama and the Other Revolutions: Playwrights, Sexual Politics and the Inte
Susan Cannon Harris
€30.10

2.5% off
Stanislavski in Practice: Exercises for Students
Nick O'Brien
€30.15