The city of Limerick, in the west of Ireland, has an interesting history. Established by the Vikings on the estuary of the River Shannon, as it flows into the Atlantic, the city was taken over by the Normans in the 12th century and fought over during the civil wars in the 17th century. The city expanded greatly in the Georgian and Victorian eras and this legacy has given Limerick a significant historical fabric of buildings from many ages. Limerick's Gothic St Mary's Cathedral, the Norman King John's Castle, mediaeval defences, imposing Georgian public buildings, extensive Victorian religious and industrial buildings, its museums including the Hunt Museum and Frank McCourt Museum and its modern architecture all reflect a dynamic local history.

Limerick in 50 Buildings explores the history of this fascinating city through a selection of its most interesting buildings and structures, showing the changes that have taken place in Limerick over the years. The book will appeal to all those who live in Limerick or who have an interest in the city. 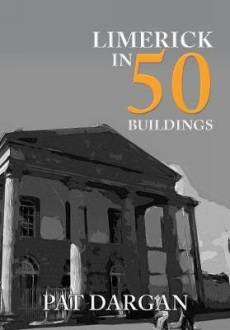 Paperback
Limerick in 50 Buildings also appears in these Categories:

Clare and the War of Independence
Joe Power
€20.00

A Guide To The Items Recovered From The Stomach Of The Last Wild Whale
Rory Duffy
€7.00

Limerick Regatta: A century and a half of boat racing on the Shannon
Kieran Kerr
€15.00

12.5% off
The Boundless and Miraculous: Found Poems in the Letters of Vincent Van Gogh
Larry Stapleton
€19.95

The Curious Story Of The Limerick 3rd edition
Matthew Potter
€12.00