Letters from the Lighthouse

We weren't supposed to be going to the pictures that night. We weren't even meant to be outside, not in a blackout, and definitely not when German bombs had been falling on London all month like pennies from a jar. February, 1941. After months of bombing raids in London, twelve-year-old Olive Bradshaw and her little brother Cliff are evacuated to the Devon coast. The only person with two spare beds is Mr Ephraim, the local lighthouse keeper. But he's not used to company and he certainly doesn't want any evacuees. Desperate to be helpful, Olive becomes his post-girl, carrying secret messages (as she likes to think of the letters) to the villagers. But Olive has a secret of her own. Her older sister Sukie went missing in an air raid, and she's desperate to discover what happened to her. And then she finds a strange coded note which seems to link Sukie to Devon, and to something dark and impossibly dangerous. 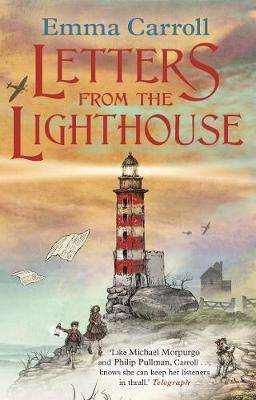 Paperback
Letters from the Lighthouse also appears in these Categories:

The Weight of Water
Sarah Crossan
€9.65

The Koala Who Could
Rachel Bright

Between Shades of Gray
Ruta Sepetys
€9.65

The Squirrels Who Squabbled
Rachel Bright
€8.40

8% off
The Accidental Adventures of Onion O'Brien: The Head of Ned Belly
Jason Byrne
€9.99

Into the Spotlight
Carrie Hope Fletcher
€14.45

The Girl and the Ghost
Hanna Alkaf
€8.40

The Monsters of Rookhaven
Padraig Kenny
€15.65

How To Avoid Witches
Roald Dahl
€8.40