In the Closet of the Vatican: Power, Homosexuality, Hypocrisy

The New York Times Bestseller--Revised and Expanded "[An] earth-shaking expose of clerical corruption"--National Catholic Reporter The arrival of Frederic Martel's In the Closet of the Vatican, published worldwide in eight languages, sent shockwaves through the religious and secular world. The book's revelations of clericalism, hypocrisy, cover-ups and widespread homosexuality in the highest echelons of the Vatican provoked questions that the most senior Vatican officials--and the Pope himself--were forced to act upon; it would go on to become a New York Times bestseller. Now, almost a year after the book's first publication, Frederic Martel reflects in a new foreword on the effect the book has had and the events that have come to light since it was first released. In the Closet of the Vatican describes the double lives of priests--including the cardinals living with their young "assistants" in luxurious apartments whilst professing humility and chastity--the cover-up of numerous cases of sexual abuse; sinister scheming in the Vatican; political conspiracy overseas in Argentina and Chile, and the resignation of Benedict XVI. From his unique position as a respected journalist with uninhibited access to some of the Vatican's most influential people and private spaces, Martel presents a shattering account of a system rotten to its very core. 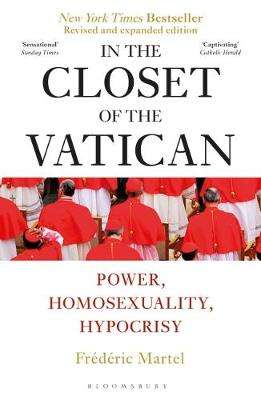 3% offPaperback
In the Closet of the Vatican: Power, Homosexuality, Hypocrisy also appears in these Categories:

9.5% off
The Sound of the Shuttle: Essays on Cultural Belonging & Protestantism in Northe
Gerald Dawe
€18.95