How the World Thinks: A Global History of Philosophy

'There to fill the Sapiens-size hole in your life' Observer In this groundbreaking global overview of philosophy, Julian Baggini travels the world to provide a wide-ranging map of human thought. One of the great unexplained wonders of human history is that written philosophy flowered entirely separately in China, India and Ancient Greece at more or less the same time. These early philosophies have had a profound impact on the development of distinctive cultures in different parts of the world. What we call 'philosophy' in the West is not even half the story. Julian Baggini sets out to expand our horizons in How the World Thinks, exploring the philosophies of Japan, India, China and the Muslim world, as well as the lesser-known oral traditions of Africa and Australia's first peoples. Interviewing thinkers from around the globe, Baggini asks questions such as: why is the West is more individualistic than the East? What makes secularism a less powerful force in the Islamic world than in Europe? And how has China resisted pressures for greater political freedom? Offering deep insights into how different regions operate, and paying as much attention to commonalities as to differences, Baggini shows that by gaining greater knowledge of how others think we take the first step to a greater understanding of ourselves. 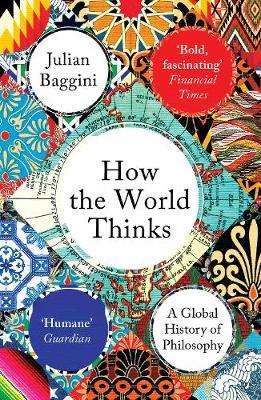 Paperback
How the World Thinks: A Global History of Philosophy also appears in these Categories:

The Courage to be Happy: True Contentment Is Within Your Power
Ichiro Kishimi
€11.25

Morality: Why we need it and how to find it
Jonathan Sacks
€24.99

The Precipice: Existential Risk and the Future of Humanity
Toby Ord
€18.75

How to Teach Philosophy to Your Dog
Anthony McGowan
€15.65

Sex and the Failed Absolute
Zizek, Slavoj (University of Ljubljana,
€27.70

The School of Life: An Emotional Education
Alain de botton
€18.75

10% off
Lessons in Stoicism
John Sellars

Twilight of the Idols
Friedrich Nietzsche
€2.45