Dobble, a visual perception card game suitable for ages 6 and up in which players race to find the one matching image between one card and another. The images may be different sizes and placed on any part of the card, making them difficult to spot. The circular cards feature an assortment of colourful images of everyday items including insects, flowers, symbols, and smiley faces. Every card is unique and has only one picture in common with every other card in the deck. Dobble has 5 mini-games: all of them reliant on speedy observation, creating excitement for children and adults alike and keeping every player involved. The first game is The Well the cards are all dealt out to players, leaving one card in the middle. Players try to fill the well by calling out the matching symbol between the middle card and their top card, placing their card on top of the middle card if they were the fastest. First player to get rid of their cards wins. The second game - The Towering Inferno works in reverse, players are taking cards from the middle pile to build their own tower. The player with the most cards wins. Hot Potato is game 3 and works in rounds. Players reveal one card at the same time, find the match between their card and the others card, shout it out and add it to their opponents hand. The player left with everyones cards is the loser. Game 4 is Catch them all. One card is face up in the middle and everyone reveals a card at once, players spot the match, claim that card and try to claim others cards before they do. The player with the most cards wins. The final mini-game is called The Poisoned Gift, players each get one card, the rest are in the middle face up, players are looking for matches between the middle card and other players cards, they spot it and place the middle card on top of their opponents pile. The player with the least cards at the end is the winner. Dobble is ideal for playing on the move, including a circular tin container to store the cards and take everywhere. 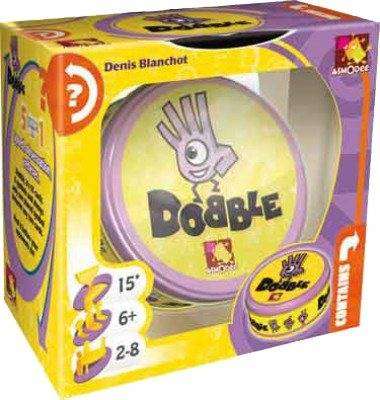