Billy's no kid - he's eighty today. He's enjoying watching the boys in the park knock a football around and this afternoon he'll be cheering on his team, Chelsea, as he has done all his life. In 1939 Billy was picked for Chelsea. Not quite nineteen, and his dreams had come true: 'Billy! Billy the Kid!' they shouted as he scored goal after goal. Surely life could get no better. But in 1939 too, the Second World War began and Billy's life was never to be the same again. Through the story of 'Billy the Kid', Michael Morpurgo reaches across the generations and with Michael Foreman's nostalgically vivid illustrations, creates a life with a past that will be moving and inspiring for young and old alike. 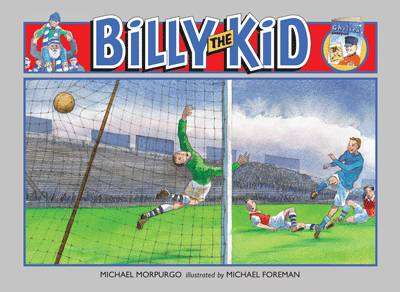 Paperback
Billy the Kid also appears in these Categories:

There's a Superhero in Your Book
Tom Fletcher
€13.75

This Morning I Met a Whale
Michael Morpurgo
€8.75