by James A. Moore

While the Avengers are in space opposing a massive alien threat, Thanos and the Black Order launch an attack against the Earth. THE AVENGERS DISCOVER THE VANGUARD OF AN INVASION. The enemy are the Builders, members of an alien race determined to purge all life on Earth. The first assault comes from Mars, launched by the forerunners of a vast fleet that has already destroyed countless worlds. Earth's Mightiest Heroes respond, then journey into deep space to unite the Shi'ar, the Kree, the Skrulls, and other intergalactic races-many of them sworn enemies- against the coming invasion. Together they must stand, for separately they will be doomed. With the majority of Earth's defenders away, the Mad Titan known as Thanos sets his sights on Earth. With his Black Order he launches an assault across the globe, devastating city after city. It falls to the planet's remaining heroes-including Iron Man, Doctor Strange, the Inhumans, and Black Panther-to fend off an inexorable invasion. 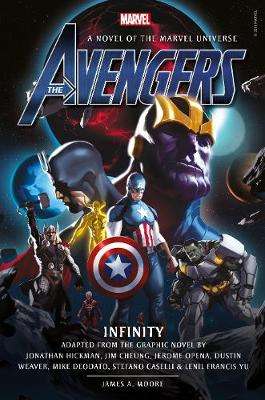