`The perfect mix of funny, foul and fearful' Metro `Brilliantly imagined . . . laugh-out-loud funny' Sunday Express The fifth book in the bestselling, gorgeously gothic and wickedly funny Amelia Fang series - perfect for readers of 7+ Meet Amelia Fang! Everyone's favourite little vampire. When Amelia and her friends are invited to Florence's grandmother 350th birthday party, they are very excited! Grand-yeti Clemence lives in the Yeti Pits, a maze of candle-lit tunnels and caves carved into Yeti Mountain. But not long after arriving, the precious glittery treasures of the ancient yetis start to go missing. And when Tangine goes missing too he becomes the prime suspect! Not only that but the tunnels of Yeti Mountain have started to collapse on themselves and it looks like Florence and her family will have to move far away. It's looking like the gang might never see each other again! Will Amelia be able to solve the mystery of the missing yeti treasure? And will she and her friends survive the perils of the crumbling Yeti Mountain and all the booby traps on the way? Join Amelia, Florence, Grimaldi, Pumpy and Tangine on the adventure of a lifetime! Also available in the Amelia Fang series: Amelia Fang and the Barbaric Ball Amelia Fang and the Unicorn Lords Amelia Fang and the Memory Thief Amelia Fang and the Half-Moon Holiday Amelia Fang is perfect for fans of Witch Wars, The Worst Witch and Isadora Moon When she's not trying to take over the world or fighting sock-stealing monsters, Laura Ellen Anderson is a bestselling children's book author & illustrator, with an increasing addiction to coffee. She spends every waking hour creating and drawing, and would quite like to live on the moon when humans finally make it possible. Laura is the creator of EVIL EMPEROR PENGUIN and illustrator of WITCH WARS, as well as many other children's books. The bestselling AMELIA FANG is her first series as author-illustrator. 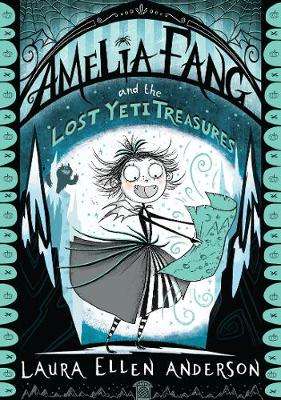 Paperback
Amelia Fang and the Lost Yeti Treasures also appears in these Categories:

Daisy and the Trouble with Burglars
Kes Gray
€8.40

Last Kids on Earth and the Skeleton Road
Max Brallier
€8.40

5% off
The Supermarket Ghost
Gordon Snell
€7.99

Fizzlebert Stump and the Girl Who Lifted Quite Heavy Things
A. F. Harrold
€8.40