Inspector McClue Murder Mystery - A Cuban Killing is a murder mystery dinner party game and contains everything you need to serve up murder, mystery and fun for 6-8 players.

Everyones a suspect when murder is on the menu! Budding Poirots and wannabe Sherlock Holmes will love every minute of hosting an evening of whodunnit entertainment with Inspector McClue's A Cuban Killing.

The gripping story is set in 1952 at The Casa Nova Hotel in Havana where the rich and famous come to play but not everything has gone to plan. Yesterday evening, hotel manager Rico Ricardo was found dead and it turns out he has been murdered! Suspicion falls on the hotel employees and guests but who would have wanted to kill him? Possibly his business partner C.D Gonzalez or Sir Ian Lemming; a British writer of spy novels or even showgirl Lola Cabana? The anticipation, mystery and excitement begin before guests have even arrived as each of the guests, or suspects, will receive their invite and suggestions for suitable dress. This all starts to set the scene for the forthcoming crime - and by the end of the evening, one or more of the guests will be exposed as a killer.

Contents: Party planner with game rules, recipes and music tips, character booklets (including their roles, backgrounds and a few tasty secrets), Place cards for each character, party invitations and envelopes for each character, six secret clues, CD with an introduction, scene setter, summary of events and solution to the crime. 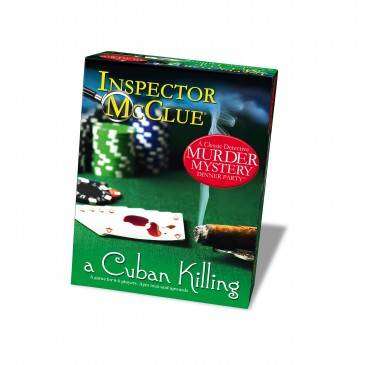 37.5% offGames
A Cuban Killing also appears in these Categories: